From the Metroon to Wikileaks: People, power and the archive

What is an archive? What is its purpose? Has the kind of archive that has evolved in 20th and early 21st century Western civilisation remained consistent with the underlying principles of the contract struck between the people and the State in a democracy, whereby the State establishes the archive in part as a guarantee of its ability to carry out its actions in a fair and accountable way? WikiLeaks, embodying as it does a renegotiation of the boundaries of knowledge and power that exist between the citizenry and the State, has brought into sharp relief the unhelpful layers of bureaucracy and vested political interests that have blunted the power of the archive in society. Now, as technology permits us to sweep away many of the encumbrances of the paper based recordkeeping legacy, is it possible for the archive to reclaim its position at the heart of a healthy democracy?

The archive in the Greek city-state of Athens in about 400 BC was located in the Metroon, a temple situated by the courthouse in the centre of the city. This archive housed the law, contracts, diplomatic records, court proceedings, and other records – even archiving the day’s art forms such as the plays of Sophocles and others. These were the raw materials of the first democracy, and they were open to any private citizen to access and make copies. The archive was watched over by the magistrate, or ‘archon’, hence our word ‘archive’. This indicates the extent to which the archive related directly to the law; the archive was the law, it provided the foundation from which power in society was wielded. And the people (of the right class and education) could access records from this trusted repository without intermediaries, either physical or administrative, to understand for themselves how their government was operating. 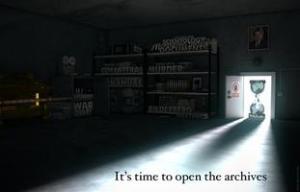 In his seminal work Archive Fever (1996), French philosopher Jacques Derrida references the role of the archon in his exploration of the role and purpose of the archive, arguing that it is through control of the archive that political power is exerted. His argument is, in part, that “Effective democratisation can always be measured by this essential criterion: the participation in and the access to the archive, its constitution, and its interpretation.” The centrality of the archive to the use and abuse of power has been well illustrated in the meticulous record keeping practices of repressive regimes from the East German Stasi to the Khmer Rouge in Cambodia. Once the regime falls, the archives are opened and become a powerful resource for those who have suffered injustices to seek redress or simply to understand.

However despite this understanding of the vital importance of the archive to a just and well managed society, it could be argued that public archives today have failed to uphold the qualities which put the Metroon at the very heart of Athenian life. A variety of factors including the massive quantities of paper based records generated from the second half of the twentieth century, a lack of adequate technologies to identify and capture records of significance, a separation of the record keeping process and the archive, and laws and practices favouring secrecy have left government archives too often as the passive recipients of records that are long removed from the business to which they relate, impotent and relegated to the category of historical curios.

By contrast, WikiLeaks shows us how an archive can be formed and pluralised directly from the affairs the records document and thus serve a powerful purpose in society. Take, for example, a WikiLeaks archive such as the United States diplomatic cables, and compare it with a typical records release by a government archive, the National Archives of Australia’s 1980 Cabinet papers release. These records were released on January 1, 2011 under the normal ’30 year rule’ which is the default position for opening public records up for general public access in many Western jurisdictions (recently amended by law to 20 years for Federal Government records in Australia under the Commonwealth Archives Act 1983). January 1 is usually a slow news day, so the Cabinet papers provided a useful filler for the media, with folksy and nostalgic stories from the political machinations of 1980. By contrast, just over one month earlier, on November 28, 2010, WikiLeaks began publishing over 250,000 United States embassy cables. The documents give the world an unprecedented insight into the US government’s foreign policy and actions in almost every corner of the globe. Significant flow on effects from the cable releases have been felt in the Arab world, in post tsunami Japan and in South East Asia, giving people the information they had been lacking to understand and address administrative and political wrongs.

An archive, as understood by the Greeks, is a tangible and irrevocable symbol of the fragile bonds of trust between the powerful and the weak. In a society in which the role of the archive is marginalised or in which malign political influence is exerted on its formation, that trust is broken. Archives which do not capture and provide ready access to the records that form our laws, our rights and our memory are not fulfilling their purpose. WikiLeaks has shown us how it could be; where using technology we are able to draw out and exclude that information which must be kept secret to protect the privacy of the vulnerable, while the vast majority of records of the acts, agreements and events which are actually occurring in our society are made part of the people’s archive and are widely disseminated to the people directly from their participation in those acts. This should be the new (from the old) model for our archives.

Encouragingly, projects like the Committee to Document the 25th January Revolution in Egypt, set up by the Egyptian National Archives, have understood the need for more contemporary and relevant archives. This project is about gathering as much primary evidence about the revolution as possible for deposit in the archives and release online – including official records, insurrectionary pamphlets, multimedia footage, Facebook and Twitter content. Importantly, there is an understanding from the start that all material should be publicly accessible to anyone on the Internet. It is a significant step in the Egyptian transition to a freer and more civilised society, and away from the abuses of the dictatorship. The power balance between people and State being redressed. The historian in charge of the project,Khaled Fahmy, has indeed spoken of the project in a manner which evokes Derrida’s thesis, saying “”The question of access to information and archives is political, because reading history is interpreting history, and interpreting history is one way of making it. Closing people off from the sources of their own history is an inherently political gesture, and equally opening that up is a political – even revolutionary – act.”

WikiLeaks opens governments. This was the role of the Athenian archive, the Metroon. It should be the role of the contemporary archive; not to serve as a gatekeeper waiting for decades before making the raw materials of history available to us in piecemeal form, but rather as the trusted guardian and provider of timely, useable evidence, the use of which will allow us to steer an honest course for our society.

This post was orignally published on WL Central: WikiLeaks news, analysis and action; http://wlcentral.org/ on July 23 2011.

Digital recordkeeping, archives and privacy professional, co-founder of the Recordkeeping Roundtable. @CassPF on Twitter.
View all posts by Cassie Findlay →
This entry was posted in Post and tagged archives, wikileaks. Bookmark the permalink.

2 Responses to From the Metroon to Wikileaks: People, power and the archive