The Invisible of the Human Race: How DNA and History Shape our Identities and Our Futures

Posted on December 1, 2014 by Cassie Findlay

In the world of recordkeeping and archives we like to bandy words like ‘memory’ and ‘identity’ around quite a bit. You’ll find them in the appraisal policies of most government archives and records authorities, and in the glossy brochures about our collections. Through our professional discourse we examine and discuss how the creation, keeping and uses of records can support memory and identity, as well as action and accountability, in countless ways. Our core professional competency, appraisal, is designed to encompass these uses for records and to ensure that our processes take account of them. 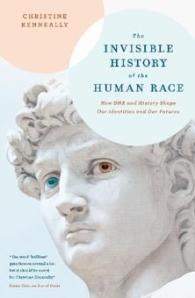 It is questions of memory and identity and how these are shaped that Christine Kenneally tackles in her book The Invisible History of the Human Race (Black Ink, 2014). However, in considering the forms of evidence that help us to understand who we are, she takes a wider view. She writes about the keeping and passing down of more than recorded information; she considers our attitudes to knowing our family history; how silence is passed down as well as information; cultural inheritance; and the role of the relatively new understandings we have of very essence of us; DNA. Making ‘nature vs nurture’ seem like a particularly blunt instrument with which to analyse ourselves, it is a unique and fascinating survey of the things that influence our formation as individuals, communities and as societies.

The book’s structure follows three parts which examine in turn the evolution and applications of family history; what we seek to pass down; and how what is passed down can shape our bodies and minds (for better or for ill). To research the book, Kenneally traveled the globe and spoke with genealogists, psychologists,  geneticists, historians, archivists and more. Importantly, her conversations were also with the real people who are directly affected by the transfer of information and sometimes by the lack of it: care leavers, holocaust survivors, and people with serious diseases hard wired into their DNA.

In the early parts of the book Kenneally describes changing attitudes to family history around the world: its decline as America’s founding fathers sought to throw off ideas of the superiority of the British aristocracy and create a nation unhindered by the ghosts of the past, and its resurgence as the population’s pride in their own history grew. Her chapter on the Einheitsfamilienstammbuch, a proof of genealogy that became a sinister tool for oppression and genocide under the Third Reich, darkly raises the question of the link between personal histories and science, a concept used by so many repressive regimes, including by Australian governments in the differing treatments of people depending on their percentage of ‘Aboriginal blood’. She also examines the rise and fall of eugenics and its uses. There are important threads, however, from these uncomfortable passages that lead to later, fascinating investigations of the science of how and why communities shape and bind themselves together, and of DNA.

Kenneally has a firm understanding of the criticality of records for healing and reparation in part no doubt as a result her work researching and writing on the experience of care leavers in Australia (see ‘The Forgotten Ones’, The Monthly, August 2012 http://www.themonthly.com.au/issue/2012/august/1354057131/christine-kenneally/forgotten-ones). Drawing on this experience, she looks at how accidental and systemic recordkeeping failures by governments have severely affected vulnerable people. She also demonstrates a clear eyed understanding of the practical barriers to access to records faced by governments and others including rapid changes in technology rendering information unreadable and the lack of resources to digitize the vast quantities of paper held in archives the world over. It is here that she notes the rise of the genealogical industry, citing players such as Ancestry.com and Find My Past. Arriving gradually over the last decade, these multi million (if not billion) dollar businesses are striking deals to digitize with memory institutions the world over. Undoubtedly this is an investment that no government is ever likely to make, but at what cost are these deals being done? As Kenneally asks: ‘are we being charged admission to history?’

There are many more fascinating stories, people and discoveries in this book. Iceland’s Íslendingabók, or the Book of Icelanders, is the world’s oldest genealogy and – slightly disturbingly – in online form is used by young people in Reykjavik to play a game of working out how closely they might be related to a prospective hook-up on a Saturday night. Children with a basic knowledge of their family history (when their parents married, grandparents’ backgrounds) were found in an Emory University (US) study to score higher on measures of self-esteem and self-control than children without these understandings.  The types of farming done by our agrarian ancestors – wheat growing versus rice growing for example  – and the physical strength need to use the different tools, has been found to have had a measurable effect on an individual’s and a society’s attitude to gender quality (where the plow was used the women were not well represented in the workforce, and remain so today in those societies).

Finally, in considering the rich and complex picture of ourselves that we have access to today, Kenneally wonders whether we should attempt to use the tools at our disposal to compile the ultimate ‘book of humanity’. It’s an intriguing if scary notion in the age of big data, mass surveillance, and our online activity leaving traces of our lives ‘out there’ forever. Perhaps by reading The Invisible History we will be better equipped to face this next age of almost total knowledge, and make the right choices about where it should lead us.

Digital recordkeeping, archives and privacy professional, co-founder of the Recordkeeping Roundtable. @CassPF on Twitter.
View all posts by Cassie Findlay →
This entry was posted in Post and tagged archives, DNA, history, identify, memory. Bookmark the permalink.