This week I was lucky enough to attend the Sydney Blockchain Workshops, organised by the formidable women of COALA and held at the Powerhouse Museum. Before going on, I should say I will not be attempting here to explain the detail of how blockchain technology works and what its features are. Others are much better at this. Try this article from ex banker Antony Lewis A gentle introduction to blockchain technology if you would like to understand the basics.

Anyway, in no particular order, here are some of the things I saw and learned.

This wasn’t a tech conference. It was a conference about possibility and change – on almost every level of society, and across so many disciplines. Yes, banking and finance (there’s a reason the banks were falling over themselves to grab the blockchain experts who were in town this week, find out more here), but so much more. This technology has the potential to change the way we assign value, and transact with each other in almost every way.

This might all seem a bit hyped, but here’s what Lawrence Lessig had to say:

Why? Because it fundamentally restructures the way we agree on things, removing the need for mechanisms of trust that we see operating today in financial markets, legal disputes and pretty much any other kind of interaction that requires us to feel assured what is said or promised will occur. This removes, or at least minimises, the need for the many intermediaries that intervene in our transactions today – from governments and central banks to the rent seekers of what the P2P Foundation‘s Michel Bauwens terms ‘netarchical capitalism’;  Google, Airbnb, YouTube: companies who capture value from cooperation without reinvestment in the value creators. It dismantles hierarchy, and replaces it with a peer to peer framework that relies only on the electricity we need to run the web (not that this is an insignificant resource, and one that featured frequently amongst the discussions). So in fact it was entirely appropriate that hanging over the entrance to the main auditorium was this protest banner from one of the Powerhouse’s current exhibitions: 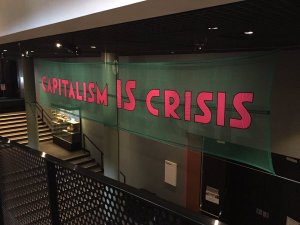 Over the two days, listening to so many amazing -and often young – people clearly with brains the size of planets, I learned so much. I learned about the many applications that are being built on blockchain technology. I learned about smart contracts and how they might be constructed to automate instructions for almost anything, from payments to farming equipment. I learned about blockchain as a decentralised database for the commons & the potential role for GLAM institutions as authority sources for input into this resource.

I met the Plantoid, a creation of COALA’s Primavera de Filipi, a cybernetic artwork and maybe the world’s first decentralised autonomous organisation with inbuilt blockchain technology that enables bitcoin to be fed to it and for it to self replicate.

…and then the autonomous cybernetic plant played me a song. #plantoid#BlockchainSYDpic.twitter.com/U9UyIAQxrS

I learned that governments, the financial sector and the legal profession are (once again) racing to catch up with the technology, and that this presents risk. As Lessig put it, we face the very serious risk of repeating the mistakes of the history of the Internet in allowing controls and barriers to stand in the way of it realising its potential (see copyright, surveillance, profit before people).

Michel Bauwens urged us to think of how we can bake in fairer systems for distribution of knowledge, of value and reward. Ways we can open markets for those previously marginalised. Where the greatest beneficiaries of trustless systems will be those without trust to give – the very poorest. Blockchain smart contracts as a means for implementing the copyfair model. Ethereum‘s Vitalek Buterin sees a decentralised operating system using the blockchain as the goal. And it is this operating system that I think presents such an exciting opportunity for a new form of recordkeeping. One of automated, non corruptible availability, authenticity and longevity. One where actors have identities that can allow them to assert rights where they had none before. Where real privacy can be achieved (see the Enigma project out of MIT’s Media Lab) but also where decentralisation offers pan-global, collaborative work that can be trusted.

We know that recordkeeping today is an imperfect beast – disconnected from business, deprecating the rights of the individual and the community in favour of the power that 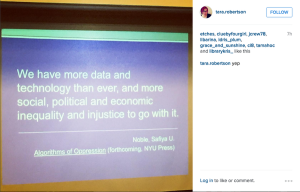 controls the systems. Here is a way to change that. As recordkeeping professionals we must come to grips with what decentralised collaboration and commons-based approaches can mean for our work,  and add our voice to the conversation that is happening now about what it can mean for our future.

Digital recordkeeping, archives and privacy professional, co-founder of the Recordkeeping Roundtable. @CassPF on Twitter.
View all posts by Cassie Findlay →
This entry was posted in Uncategorized. Bookmark the permalink.

1 Response to Redefine, reinvent and disrupt: the Sydney Blockchain Workshops